The project includes a 2 mile multi-use trail on the Westfield River Levee from Ellsworth Street on the west end to the Williams Riding Way Flood Control Pump Station off Meadow Street at the east end.  The trail provides an east-west off road connector for the neighborhoods along the levee to downtown destinations including the future Columbia Greenway Trail.  In addition to downtown destinations the trail also provides active recreation along the Westfield River including connections to Chapman Playground, Whitney Field, multiple parks adjacent to the Great River bridges, and the Esplanade described below.

The Westfield River Esplanade is located along the Westfield River Levee between Sackett Street and Elm Street. The intent of the work was to improve the use and aesthetics of the location, while at the same time, providing reinforcement to the structure of the levee. The esplanade highlights the intersection of the Columbia Greenway Rail Trail and the Westfield River Levee Multi-Use Trail. This will be achieved by taking pre-existing elements on the site and incorporating them with design elements used in other recent downtown projects. The end result will create a space that is pedestrian and bicycle friendly while providing other multi-use potential to the residents and visitors of Westfield.  The majority of the Esplanade improvements have already been constructed with the finishing pieces to be constructed with the next phase of the Columbia Greenway.

The Westfield River Levee Multi-Use Trail is currently designed and is programmed for construction funds in 2023. Right-of-Way processes as well as other action items are required to be completed prior construction. 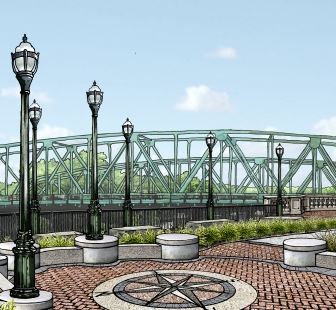